Playgrounds are inherently safe spaces for children. They are a hub for child play, fun for families, enjoyment with friends, and places for communities to come together.  However, these places are also locations where unintentional injuries occur and recent research has shown playgrounds are places where children are exposed to hazards.

More than 200,000 children are injured and require medical attention from playground injuries each year across the US. That is equivalent to more than 500 children per day.  Playgrounds are also common locations where equipment and surfacing get hot which lead to children being exposed to UV radiation, intense sun, pesticides, and other harmful chemicals.

Unsafe equipment and surfacing along with hot playground temperatures are uncomfortable and unsafe. This can discourage children from being active which causes long term health consequences, such as obesity and depression.  Continuous exposure to unsafe environmental conditions has led to long-term injuries, such as sunburns, hyperthermia, thermal burns, and asthmatic complications. 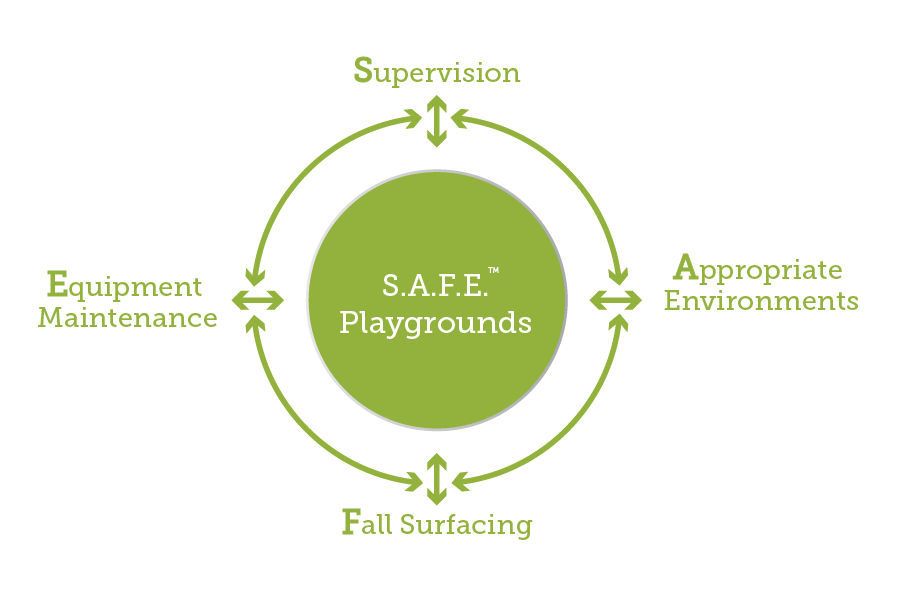 Rather than being hierarchical in nature, each S.A.F.E.™ element interacts with one another. In other words, working on one element alone, such as surfacing, will not prevent all injuries unless supervision, appropriate environments, and maintenance are also considered.

For example, let’s say a 3-year-old child fell from a horizontal ladder onto a grass surface under the equipment and broke her arm. The hard ground under the equipment (inappropriate surface) will be cited as the cause of the injury, but was it really the only cause? Was it not also a lack of supervision, since it is questionable whether a 3-year-old should be on a horizontal ladder? Was the 3-year-old developmentally able to grip the bars of the ladders? What about the lack of maintenance or shade, which resulted in inappropriate and hot surfacing under and around the equipment? It is evident that all four elements contributed to the injury.